We’ll sing a song, a soldier’s song,
With cheering rousing chorus,
As round our blazing fires we throng,
The starry heavens o’er us;
Impatient for the coming fight,
And as we wait the morning’s light,
Here in the silence of the night,
We’ll chant a soldier’s song.

Chorus:
Soldiers are we
whose lives are pledged to Ireland;
Some have come
from a land beyond the wave.
Sworn to be free,
No more our ancient sire land
Shall shelter the despot or the slave.
Tonight we man the gap of danger
In Erin’s cause, come woe or weal
“Mid cannons” roar and rifles peal,
We’ll chant a soldier’s song.

In valley green, on towering crag,
Our fathers fought before us,
And conquered ‘neath the same old flag
That’s proudly floating o’er us.
We’re children of a fighting race,
That never yet has known disgrace,
And as we march, the foe to face,
We’ll chant a soldier’s song. 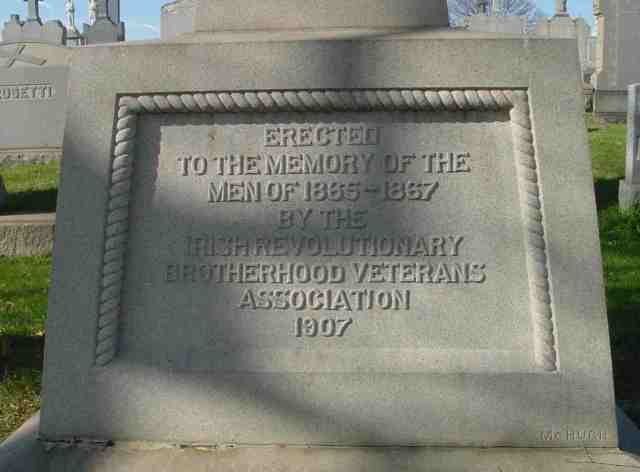 ‘Twas down by the glenside, I met an old woman
A-plucking young nettles, she ne’er saw me coming
I listened a while to the song she was humming
Glory O, Glory O, to the bold Fenian men

‘Tis fifty long years since I saw the moon beaming
On strong manly forms, on eyes with hope gleaming
I see them again, sure, in all my sad dreaming
Glory O, Glory O, to the bold Fenian men.

When I was a young girl, their marching and drilling
Awoke in the glenside sounds awesome and thrilling
They loved poor old Ireland, to die they were willing
Glory O, Glory O, to the bold Fenian men.

Some died on the glenside, some died near a stranger
And wise men have told us their cause was a failure
But they fought for old Ireland and never feared danger
Glory O, Glory O, to the bold Fenian men

I passed on my way, God be praised that I met her
Be life long or short, sure I’ll never forget her
We may have brave men, but we’ll never have better
Glory O, Glory O, to the bold Fenian men

Ah, but maybe it`s the way you were taught
Or maybe it`s the way we fought
But a smile never grins without tears to begin
For each kiss is a cry we all lost
Though nothing is left to gain
But for the banshee that stole the grave
Cause we find ourselves in the same old mess
Singin’ drunken lullabies

Born in Abbotts Cross He was the first of four
But it wasn’t long before the Brits ran them from their own door,
Following that awful day
Bobby found home, with The Provisional I.R.A

Arrested and Sent to jail in 1973′
For three long years he yearned for Liberty,
In 1977 he faced fourteen years more
Never did he think, It would be the last time he’d stand outside a prison door

On the 1st of March 81′
His final battle had begun,
Only 27 years of age
Young Bobby was to die in a H-Block cage

On the 9th of April for everyone to see
He was elected Westministers Youngest MP,
But without the introduction of the 5 Demands
”We must see our present fight right through to the very end” said Our Hero Bobby Sands

On the 5th of May his life had ended
Words from 50 Nations ” His Courage Commended”
A Memorial in Cuba, A Statue in Sydney and of course The Street in Tehran,
Just some of the Tributes from the world
To salute the life of Ireland’s Bobby Sands

After 31 long years his spirit still lives on
With any thought of Bobby, The movement remains strong,
So on our road to Freedom we remember the courage of our 10,
And of course Bobby’s most famous words ” OUR REVENGE WILL BE THE LAUGHTER OF OUR CHILDREN”

The Rhythm Of Time By Bobby Sands

There’s an inner thing in every man,
Do you know this thing my friend?
It has withstood the blows of a million years,
And will do so to the end.

It was born when time did not exist,
And it grew up out of life,
It cut down evil’s strangling vines,
Like a slashing searing knife.

It lit fires when fires were not,
And burnt the mind of man,
Tempering leandened hearts to steel,
From the time that time began.

It wept by the waters of Babylon,
And when all men were a loss,
It screeched in writhing agony,
And it hung bleeding from the Cross.

It died in Rome by lion and sword,
And in defiant cruel array,
When the deathly word was ‘Spartacus’
Along with Appian Way.

It marched with Wat the Tyler’s poor,
And frightened lord and king,
And it was emblazoned in their deathly stare,
As e’er a living thing.

It smiled in holy innocence,
Before conquistadors of old,
So meek and tame and unaware,
Of the deathly power of gold.

It burst forth through pitiful Paris streets,
And stormed the old Bastille,
And marched upon the serpent’s head,
And crushed it ‘neath its heel.

It died in blood on Buffalo Plains,
And starved by moons of rain,
Its heart was buried in Wounded Knee,
But it will come to rise again.

It screamed aloud by Kerry lakes,
As it was knelt upon the ground,
And it died in great defiance,
As they coldly shot it down.

It is found in every light of hope,
It knows no bounds nor space
It has risen in red and black and white,
It is there in every race.

It lies in the hearts of heroes dead,
It screams in tyrants’ eyes,
It has reached the peak of mountains high,
It comes searing ‘cross the skies.

It lights the dark of this prison cell,
It thunders forth its might,
It is ‘the undauntable thought’, my friend,
That thought that says ‘I’m right!’

Every Dog Has Its Day (Live) lyrics-Floggin Molly

Well I’ve drunk to drown, on every ocean I’ve been
Lake Tanganyika, where the crocodiles swim
Halifax, Nova Scotia to Van Diemen’s land
Well I drank with the Sultan, down the Suez Canal

Well there was old Jerry Rooney, who was mad as a mule
Spillblood Maloney had a head like one too
That night on the bridge, with my shovel in hand
Well he threatened to kill me, for sure he picked the wrong man

Well there was mutiny in Lagos, aboard the mean ship Skondi
Ten or twelve days in prison, till the bastards set me free
McCloskey you’re free

Now I love the sea and she wants me back
So I leave this ol’ harbor, with the wind of Bridgette’s Crack
Goodbye mother Theresa, I hope the kids settle down
I must head for the Chinas, pray to God I don’t drown

For Every Dog Has Its Day
Like every woman, she gets her own way
And if there’s a ship that sails tonight
I’ll captain that too

It’s four in the mornin’
Battered and numb
A loaded room, an empty gun
I whistle a tune, I heard years before
The clock started tickin’
Where did the time go
I danced to the mornin’
She called out my name
The wind was a howlin’
And down came the rain
Her arms they caressed me
Sweet was her brow
She opened my eyes
To banish the doubt
Wash me down in all of your joy
But don’t drag me through this again

Walk away, watch me as I wave
One foot here, but sure the other’s in the grave
Walk away, walk away