Sevco Are A Disgrace 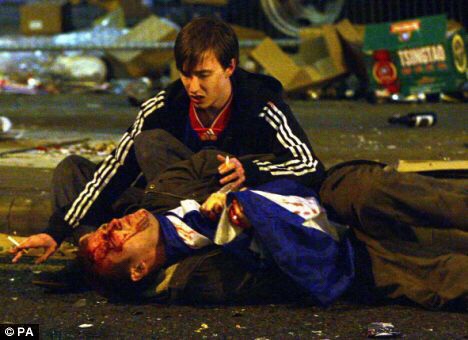 Sevco Football club Are a Disgrace ..Have they come out and condemned their paramilitary style fans for knifing 2 innocent Croatian fans who had travelled to scotland to see a football match. NO ..

SO this is what has become of that rancid , evil institution at Ibrox .. they can’t win a title in their short 6 year existence, So instead the criminal elements of the club have chosen to put us all on notice go to a game against us and your likely to get stabbed to death 💀..

I’d urge all football fans to stay safe this season and stay ready to protect yourself against Scotland’s shame Sevco FC ….

THE CELTIC FOOTSOLDIERS MACLAD1888 The blog was setup over 8 years ago its mainly about celtic football club and the great fans ,but olso the wider footballing issues in scotland like Rangers fc deceased 1873-2012-and there piriah club Sevco .... its always developing and its not the finished article theres pages at the top which are works in progress..the core off the blog is fully operational and theres more than enough for people to get through,im always adding stuff.so enjoy it and share...this club off ours is very special its like no other and the celtic family is worldwide hh and god bless YNWA
View all posts by Maclad1888 →
This entry was posted in sevco5088, Various and tagged Ibrox Stadium, newco, parasite uk, Rangers F.C, scotland shame, sevco, sevco5088, sevconians, shame, Tax evasion, The Zombies. Bookmark the permalink.