Who Wins McGregor Or Mayweather…

Who wins McGregor or Mayweather

💵 both guys are going to be on everyone’s mind nxt few months , their bank accounts are getting a huge injection , biggest event in sport in yrs il be watching , I respect Floyd as a boxer but I’m a huge Mcgregor fan and I

🍀 whoever wins don’t matter as they’ll be superstars after this fight , and who’s to say their won’t be a 2 nd fight if say McGregor wins ..

🤑another 180 million dollar split , these guys aren’t stupid they’ve been punched about the head , but it’s about the money both are trying to make as much as they can before they can’t anymore , I see 2 fights no matter what the result in August ,if mayweather wins I see McGregor calling him to his yard and if Connar wins theirs obviously going to be a 2 nd fight , this time next year both fighters will still be on everyone’s mind , good on them both , it’s great theatre and drama and the build up to any fight is usually more entertaining than the event it’s self , so the press conferences and media calls interviews we have all that to look forward to I can’t wait ….. 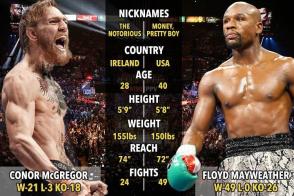 Check the page on the blog and keep stopping back for more content up until the big fight on August 26th ….

THE CELTIC FOOTSOLDIERS MACLAD1888 The blog was setup over 6 years ago its mainly about celtic football club and the great fans ,but olso the wider footballing issues in scotland like Rangers fc deceased 1873-2012-and there piriah club Sevco .... its always developing and its not the finished article theres pages at the top which are works in progress..the core off the blog is fully operational and theres more than enough for people to get through,im always adding stuff.so enjoy it and share...this club off ours is very special its like no other and the celtic family is worldwide hh and god bless YNWA
View all posts by Maclad1888 →
This entry was posted in Various and tagged Advertising, August 26th 2017, boxing, irish, mAYWEATHER, mcgregor, Sports, ufc, wordpress. Bookmark the permalink.